What is Cricket Flour & Why You Should Eat It

Cricket flour, or cricket powder, is a mild-tasting protein powder made out of milled crickets. Cricket protein is nothing new. People have been eating insects for millennia. It was only recently, however, that cricket flour appeared on the menu. But cricket flour isn’t just about nutrition. It’s about sustainability too. That’s right. The planet needs cricket protein just as badly as humans do.

What Is Cricket Flour?

Cricket flour, or cricket powder, is a mild-tasting protein powder made out of milled crickets.

These crickets come from cricket farms. Compared to feedlots (for raising and slaughtering cows), cricket farms use less feed and generate less greenhouse gases per kilogram protein harvested. And thanks to large-scale cricket farming and distribution, you can have cricket-based food products delivered straight to your door.

But why eat crickets? Is cricket protein powder really that healthy, really that eco-friendly?

In fact, cricket protein is nothing new. People have been eating insects for millennia.

It was only recently, however, that cricket flour appeared on the menu, bringing a number of health benefits with it.

But if you’re reading this article, you don’t need to work for your crickets. Thanks to large-scale cricket farming and distribution, you can have cricket products delivered straight to your door. And for good reason.

The specific benefits of cricket flour include:

#1: A Cricket Flour is a Complete Protein

Amino acids are the building blocks of protein. They form nearly every tissue in your body.

Cricket protein is considered a “complete protein” because it contains all nine essential amino acids. These amino acids -- leucine, isoleucine, valine, methionine, tryptophan, threonine, lysine, histidine, and phenylalanine -- are considered “essential” because you must get them through diet. You can’t synthesize them.

Leucine, for instance, is a branched chain amino acid (BCAA) crucial for muscle growth. You won’t find much leucine in plant protein, but cricket protein is a fine source of BCAAs.

Then there’s tryptophan, needed to make your sleep hormone (melatonin) and your happy chemical (serotonin). Did you know that collagen protein -- all the rage right now -- has negligible levels of tryptophan?

#2: Cricket Flour is Good For The Planet

Beef is a great source of bioavailable protein. Unfortunately, raising cows isn’t so great for the environment.

When cows fart, they produce tons of methane. Methane, by the way, is an extremely potent greenhouse gas, about 30x more potent than carbon dioxide. Not good for climate change.

- Doesn’t use lots of antibiotics

To be clear, crickets won’t solve climate change, pollution, and the global resource problem. But they can be part of the solution.

You can be part of the solution too by enjoying crickets, cricket flour, and cricket bars. If enough people do it, it will make a difference.

#3: Cricket Flour is Rich In Minerals

When you eat cricket powder, you’re eating the entire cricket. Which means valuable minerals come along for the ride.

Iodine is required to produce thyroid hormone, which regulates your metabolism. Low iodine manifests as hypothyroidism.

Manganese helps you form bone and metabolize protein. Many enzymes in your body are dependent on manganese. One called glutamine synthetase turns toxic ammonia into glutamine, a beneficial amino acid.

The takeaway is that cricket powder -- unlike other protein powders -- contains valuable minerals scarce in the modern diet.

#4: Cricket Flour is a Good Source Of Fatty Acids

Fat is not to be feared. Fat builds your cell membranes, stores energy, and helps you absorb fat-soluble vitamins like A, D, and K.

That’s the conventional wisdom. But the latest science has found no link between dietary saturated fat and heart disease.

In fact, saturated fat consumption was inversely correlated with stroke incidence in a large Japanese cohort.

So don’t fear the fat, and enjoy your crickets.

#5: Cricket Flour is High In B Vitamins

Take B12, abundant in cricket powder. B12 is important. It teams up with folate to synthesize your DNA and produce your red blood cells.

Skimp on B12 and a wide range of symptoms can result: brain fog, anemia, depression -- the list is long.

Animals are the best dietary source of B12. One serving of cricket protein powder, for example, contains 80% of the RDA.

Along with B12, cricket protein is also an excellent source of vitamin B2 (riboflavin) and vitamin B7 (biotin). Riboflavin and biotin support skin health, which is important to most people.

Chitin is a prebiotic -- a special kind of fiber that feeds beneficial bacteria (probiotics) in your gut. A cricket’s exoskeleton, you’ll want to know, is made -- in part -- of chitin.

Scientists, in fact, believe that chitin may drive some of the gut-related health benefits of cricket flour.

Researchers fed 20 participants two separate breakfasts: one containing cricket flour, the other not. To eliminate bias, both subjects and scientists were blind to the breakfast type.

What do crickets taste like? They're mild, so easy to hide. In this case, chocolate malt did the trick.

You’re probably thinking: that’s great, but what does one microbe prove about gut health?

Alone, not much. But the researchers measured something else: inflammation.

After the two weeks were up, cricket flour eaters had lower inflammation. (As measured by an inflammatory particle called TNF-α).

Systemic inflammation has been linked to every chronic disease: diabetes, heart disease, cancer, and Alzheimer’s. This is a really cool finding 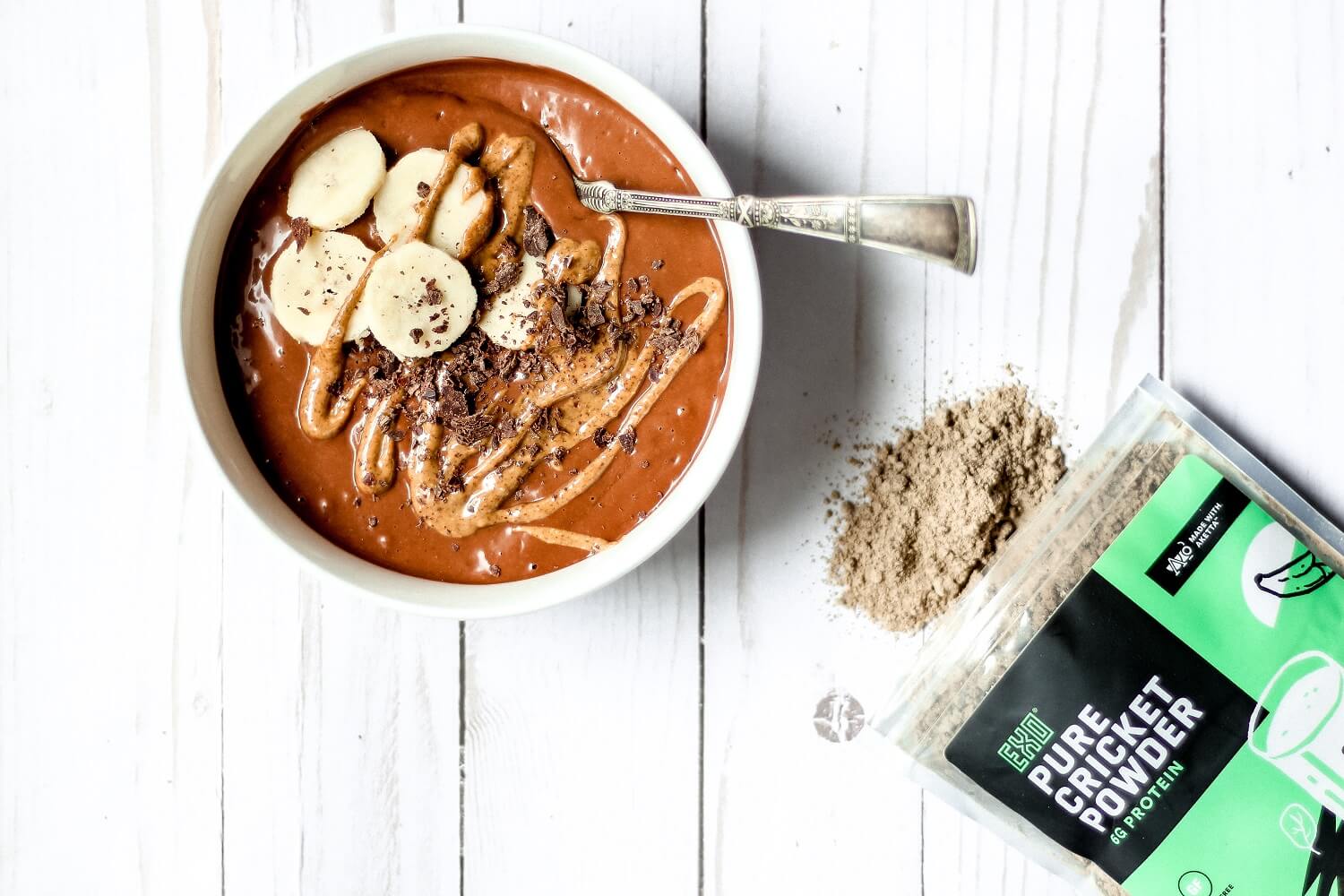 In terms of nutrition, cricket powder is similar to whole crickets. One serving (10 grams) of cricket flour contains:

Because it’s nutrient-dense and low-carb, cricket flour compliments both the paleo and keto diet. Also, high-quality cricket powders are generally gluten-free, and dairy-free.

Note, however, that those with shellfish allergies should be cautious with cricket flour. Believe it or not, crickets and crustaceans are closely related!

Put another way: eating crickets is like eating shrimp or lobsters. Odd-looking, but delicious!

Cricket powder has a lightly malted flavor, with hints of raw cocoa. Nothing to overwhelm your taste buds.

Nothing to overwhelm your daily smoothie either.

Here’s an idea. Next time a friend visits, offer them a cricket protein smoothie. (Note: first make sure this friend doesn’t have a crustacean allergy and is generally okay with eating meat).

It tastes good. What’s in it?

List a few ingredients, then mention the cricket powder. Casually.

They will be surprised, but probably in a good way. Congrats, you’ve just converted another person to crickets. Bottoms up! 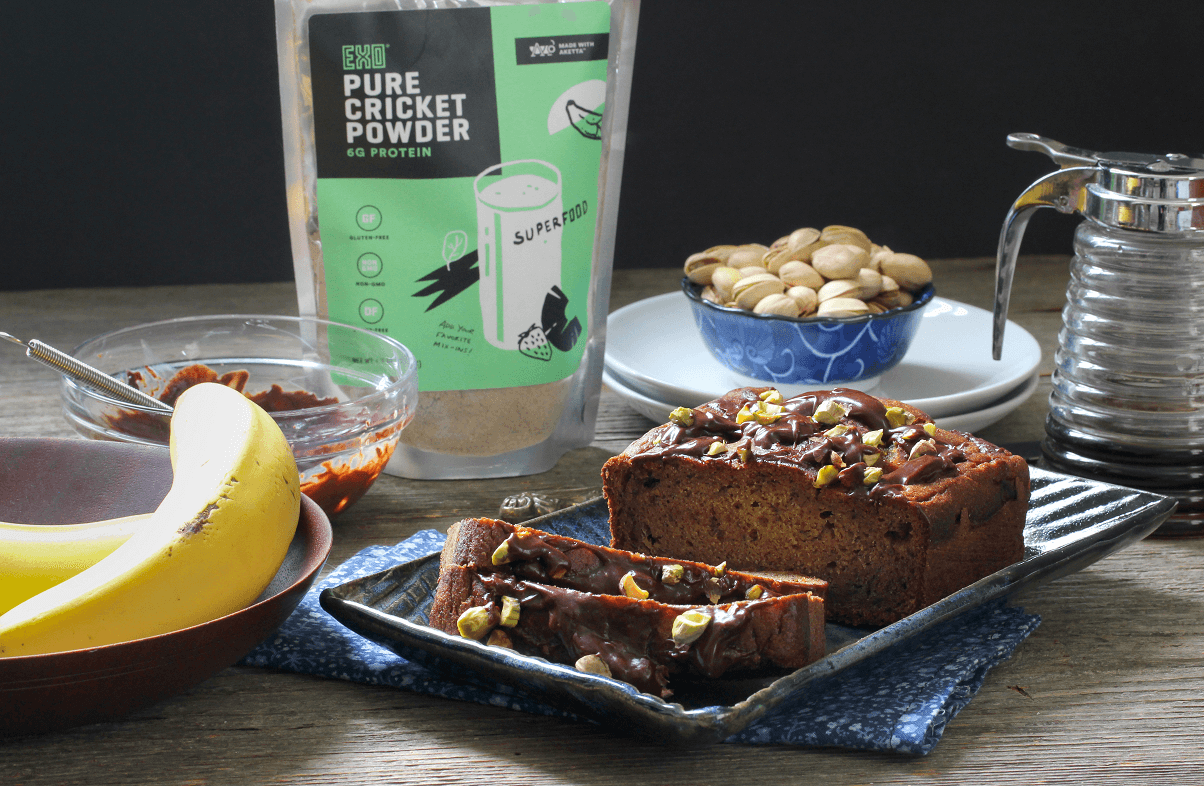 How To Eat Cricket Flour

Time to get practical about bringing cricket powder into your life.

Smoothies are probably the best vessel. Just blend away and you’ll hardly notice it.

How much cricket protein should you eat? Depends on your activity level, current protein intake, and a variety of other factors.

Cricket flour, by the way, contains 6 grams protein per serving to help you meet your daily protein requirements.

But as you learned, crickets are more than just protein. They’re stocked with fiber, fatty acids, and micronutrients too.

In other words, think of cricket flour as a nutrient-dense smoothie booster. Boost away.

A New Source Of Cricket Protein

People have been eating crickets for ages. They’re a staple of the ancestral diet.

To be clear, cricket powder isn’t the only healthy protein out there. When you open your closet, there isn’t only one shirt that fits.

But there’s one shirt (picture it) that’s a little softer, a little more comfortable, a little -- well -- better than the others.

Maybe cricket flour will be like this shirt: Your new favorite. Only one way to find out.

How would you consume cricket flour? Let us know in the comments!